This book is the edition of Rude Mechanicals Press. It is the same content, format, design as Lost Art Press' new edition.

The Mechanic’s Companion by Peter Nicholson

Peter Nicholson’s “The Mechanic's Companion, Or, the Elements and Practice of Carpentry, Joinery, Bricklaying, Masonry, Slating, Plastering, Painting, Smithing, and Turning” is one of the classics, and among the most readable books on woodworking in the early 19th century. Yet, with the exception of the well-known workbench from Plate 12, it doesn’t get as much attention as other early English technical books. That’s a shame, because it’s an invaluable and thorough treatment of techniques, with 40 plates that provide an excellent and detailed look at the tools of the time, along with a straightforward chapter on the geometry instruction necessary to the building trades.

Nicholson – unlike other technical writers of the time – was a trained cabinetmaker, who later became an architect, prolific author and teacher. So he writes (and writes well) with the authority of experience and clarity on all things carpentry and joinery. For the other trades covered, he relies on masters for solid information and relays it in easy-to-understand prose.

His book is an homage and update to Joseph Moxon’s “Mechanick Exercises” (the first English-language book on the trades, published in book form in 1703). As Nicholson writes in his introduction:

“MORE than a century has elapsed since an in­genious and useful work on the Arts connected with Building was published under the title of Mechanical Exercises, by the celebrated Joseph Moxon: that it was both useful and popular the various editions testify, and at this time it is become scarce and rarely to he met with. It can be no disparagement to its ingenious author, to say that the progress of science, and the changes in matters of art have rendered the work obsolete and useless. It treated on Smithing, Joinery, Carpentry, Turning, Bricklaying, and Dialling.

“I have followed the excellent plan of Moxon and treated each art distinctly: I have first described the several tools belonging to each branch of business, next the methods of performing the various manual operations or exercises, to which they are applicable, these are further illustrated and explained by nume­rous plates: the descriptions are made as plain and familiar as possible; and there are few operations but will be found fully and clearly explained: finally to each is added an Index and extensive Glossary of terms used by workmen in each art, with references also to the plates: and it has been my endeavour that the description with its definition should be clear, and show the connection between the science and the art, thereby producing a pleasing and lasting effect upon the mind....”

This edition of “The Mechanic’s Companion” is a scan of an 1845 book, in which I’ve cleaned up the foxing, and broken and filled-in type, checking and correcting every page as necessary for legibility. To make it still easier to read, I’ve increased the type size a bit (the original is awfully small), and corrected a few bindery mistakes where plates were misplaced.

The book is printed on acid-free paper, and the interior signatures are Smyth sewn for durability. The hard cover is wrapped in cotton cloth and stamped in foil. It is produced and printed entirely in the United States.

Carry it into the shop (or to the building site); jot notes in the margins and on the back of the plate pages; open it wide. It can take it. 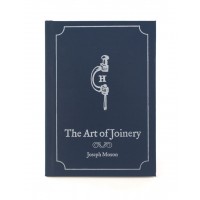